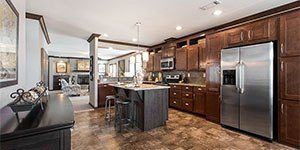 When we founded Mobile Homes Direct back in 2014, we did so to make a difference in the lives of those who would trust our company with one of the most important buying decisions they would ever make. However a few weeks ago I felt the team, including myself, had begun to lose a little of that focus and to find ourselves in the daily grind that most sales organizations exist in continuously. During our sales training the next day, rather than working on rebuttals or product knowledge, I asked each of my team members to write a brief paragraph about the customer who had made the biggest impact on their careers so far. The meeting was heartfelt, and everyone went away refocused on the reason we come together to work each day. Below you’ll find a few of those shared stories:

“One couple I worked with had lived in their current home for over 20 years, and they were now looking for their retirement home. We were able to find just the right home for them, and everything was a go for the sale. Once the home was delivered, it was vandalized by some of the neighborhood teenagers. Hateful words were spray painted all over the home. What happened next solidified my faith in our team and our practices. We were able to help them out and just recently were able to iron out all of the final details. The couple was so thankful for everything we did for them. They were so positive throughout the entire process that I look forward to speaking to them just to feel their good vibes. When you can talk with people like that, it’s a little reminder that everything is going to be alright!” – Colin Boyd (Michelle and George from Houston)

“The customer that had the biggest impact on me was a teacher who, when I met her, had terrible credit and an empty piece of property her kids referred to as “Never Never Land” because she was never able to get a home out there. We were able to work with her through our credit repair program and drastically raised her scores. When she received an approval from the bank I called to let her know. She happened to be in class teaching and broke down crying in front of her students. Through every obstacle, she remained steadfast and had finally received her new home.” – Jason Piña (Karyn from Harper, TX)

“During my first year, I spoke with a very sweet woman on live chat and shortly after that we spoke via the phone. We talked about her and her daughter and how she was searching for a new home. Not only was she an absolute joy to speak with, but she was also a very hard working woman even at the age of 68. One day I called to check how everything was going with the home. She didn’t answer. However, she called me back later, and I was blown away by the reason she had missed my call. She told me she wasn’t available to answer my call because she and her daughter were underneath her new home connecting her water and sewer lines. This was something that we would have gladly done for her, but she insisted that she had someone who would take care of it. That “someone” was her. That struck a chord with me, and I realized just what kind of people we help. – Jesse Martinez (Shirley from McKinney, TX)

GIVE US A CALL TODAY!

877-651-5486
Find out why so many Texas families choose Mobile Homes Direct 4 Less to help them find the mobile & manufactured homes they want at a price they can afford. We’re ready to help you begin the home buying process today!

Sundays: By requested appointment only